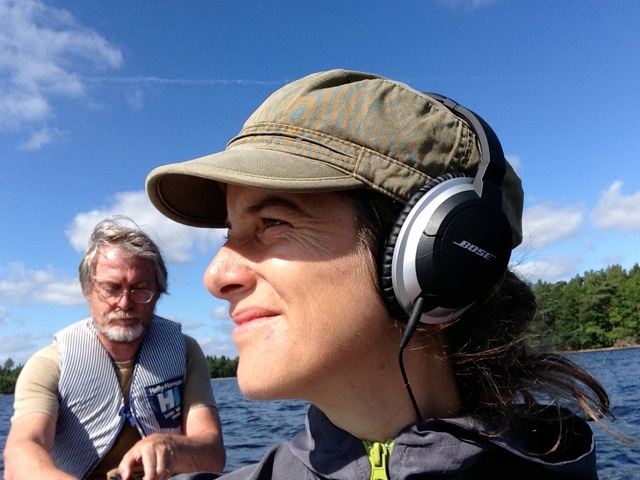 My lute, be as thou wert when thou didst grow

With thy green mother in some shady grove,

When immelodious winds but made thee move,

And birds their ramage did on thee bestow.

. . . as in woods before . . . as a title, is a fragment from the 17th-century Scottish poet William Drummond’s lament addressed to his lute on the death of his lover. The complete line is be silent as in woods before, a frequent theme in Jacobean literature where the living tree is itself silent, sounded only by winds and birds (ramage is an archaic term for birdsong in trees). When it dies or is cut down and is turned into a musical instrument, however, its “voice” is released. A similar idea surrounds Orlando Gibbons madrigal text The Silver Swan:

The silver Swan, who, living, had no note,

That the instruments of the modern string quartet were all trees in their former existence has fascinated me for more than twenty years, and has influenced a number of compositions and installations. This installation, specially composed for Cheeseburn, combines the “conventional” sounds of the instruments alongside the wind in the trees and birdsong referred to by Drummond. The instruments, birds, and wind were all recorded in the parterre here in the garden, and the instrumental sounds are all derived from improvisations done live with the sounds audible from the parterre – playful interactions with the birds singing in the surrounding trees, and even tuning in to the distant drone of the lawnmower (which, incidentally, is in B minor!). Special vibrating speakers attached to the instruments resonate the sounds from within them: the instruments seem to be dreaming of their past lives as trees, while also sounding their “new” voices as musical instruments. Though intended as an installation where listeners come and go, remaining with it as long as they wish, the complete composition lasts nine minutes.

A passage, a gate, a tunnel always brings you to the other side. From the inside to the outside, the outside to the inside from a place to another space. You are entering into something or exiting from somewhere. In both ways: physical and metaphorical.

The first part of this sound installation is the entrance to the sculpture park and the second part, the tunnel, leads you through the darker part of the garden under mature trees into the lighter area of the open grass.

All material for this sound installation was recorded on site. In the late afternoon you can hear a drone in the tunnel, created by millions of midges and other insects. A recording of this sound is included in the installation along with flute and environmental sounds.

Sabine Vogel’s stay and work at Cheeseburn is supported by Cheeseburn and the “InterStip 2016” from the Ministry of Science, Research and Culture of Brandenburg.

Bennett Hogg and Sabine Vogel have been collaborating for many years and are both members of the collective “Landscape Quartet”, hosted by Newcastle University and supported by an AHRC research grant in 2013-14.

They focus on improvisation and sound art in, in response to, and with the natural environment. Their work includes performances and installations on site, compositions and installation in concert and gallery spaces.

For Cheeseburn they are working on a live performances and sound installations in the gardens, responding to the landscape, the natural environment and the sculptures.